With Recession Ahead, Early Intervention Remains Essential for CA Kids and Economy

With the COVID-19 recession predicted to exceed the downturn of the Great Recession, the state is bracing for dramatic cuts to programs, including those that serve young children. The recession we’re entering is expected to drive California into a $54.3 billion deficit over the next year, according to a memo released by California Department of Finance last Thursday. Cuts to many key services are expected, and one devastating outcome may be the further erosion of an already fragile system that serves infants and toddlers with developmental delays.

Early Start is the early intervention program for young children with developmental delays in California, otherwise known as Part C of the Individuals with Disabilities Education Act (IDEA). During the Great Recession, the Department of Developmental Services, which oversees Early Start, underwent a series of annual budget cuts totaling approximately $984 million. This included the elimination of Part C services to at-risk infants and toddlers, such as those who had low birth weight or a history of abuse and neglect.

Although some funding has resumed, not all of the cuts enacted during the Great Recession have been reversed and Early Start still operates on a thin budget. At the same time, the need for early intervention grows. While California’s overall population has increased by less than 1% on average in recent years, Early Start participation is growing particularly fast—twice as fast as the consumer population age 3 and older.

California’s eligibility criteria for this program is narrower than other states, so many children are not being served who could be. The federal IDEA program allows states some flexibility in establishing their own definitions of developmental delay. California’s definition is more restrictive than other states, and therefore it serves a smaller proportion of its infants and toddler population —3% of the infant and toddler population in California, compared to almost 10% in Massachusetts.

With the recession looming, the increased investments in Early Start included in the Governor’s January 2020-21 budget proposal are under threat. However, failure to invest in children with delays at a time when they already face barriers to access for screening and services could have devastating effects on children, and their families. As is, the federal government classifies California’s performance in IDEA Part C as “needs assistance for two or more consecutive years.”

Investing in the developmental growth of at-risk young children is a cost-effective strategy—even during a budget crisis. Short-term costs are more than offset by immediate and long-term benefits like reduction in the need for special education and better health outcomes. Early Start is an important component of the state’s early identification and intervention system and needs to be strengthened in order to best meet the needs of California’s kids and to promote ongoing economic growth in our state. 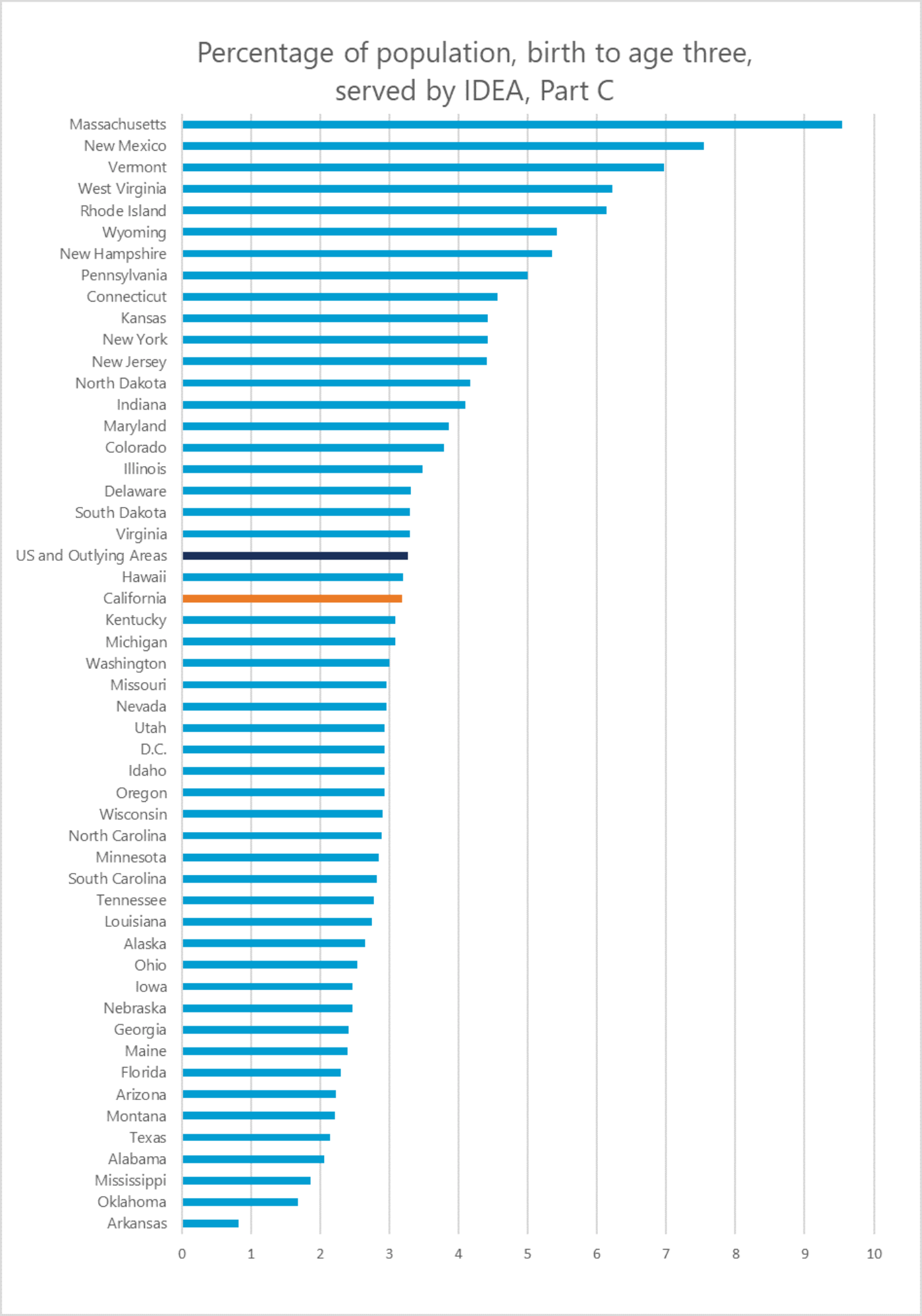 The First 5 Center for Children’s Policy is releasing a new policy brief, "California’s Early Identification and Intervention System and the Role of Help Me Grow,” which describes county systems that improve identification and linkage.

With Disruption of Supports, Families of Children with Developmental Concerns Under Stress

For a child with a developmental delay or disability, timely and accessible intervention services can be critical to that child’s wellbeing, as well as that of her parents or caregivers. COVID-19 has disrupted services for many families, compounding the stress related to changes to employment, child care, and overall routines. As a result, rates of stress, depression, and anxiety during the pandemic are significantly higher in households where a young child has a disability.